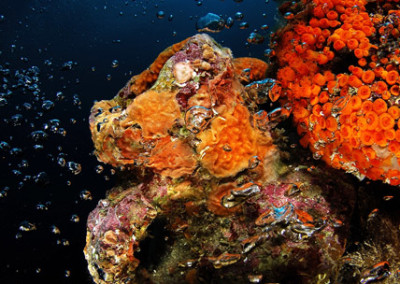 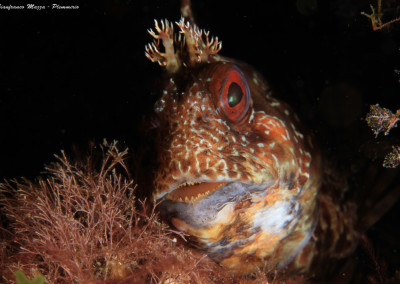 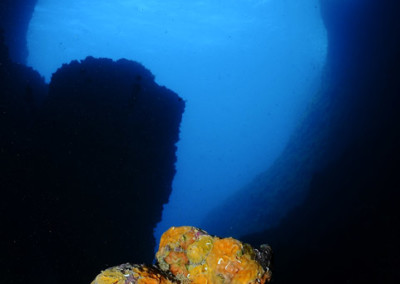 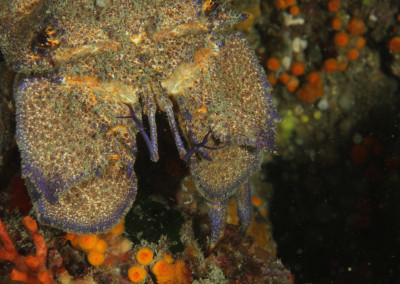 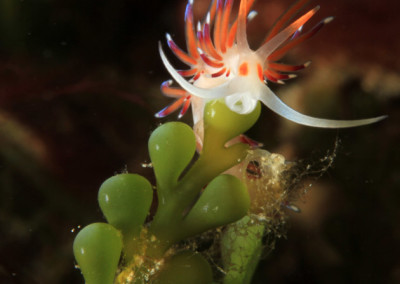 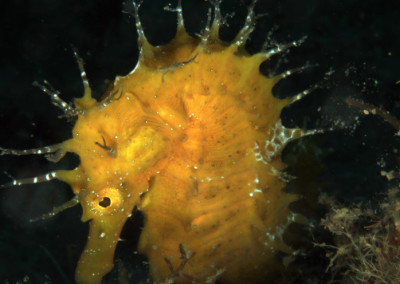 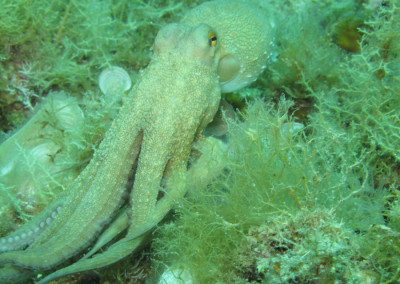 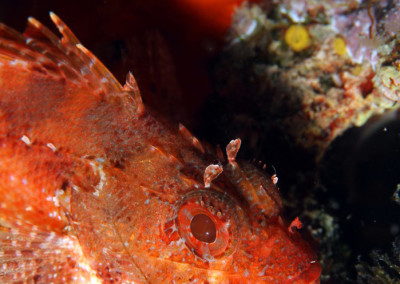 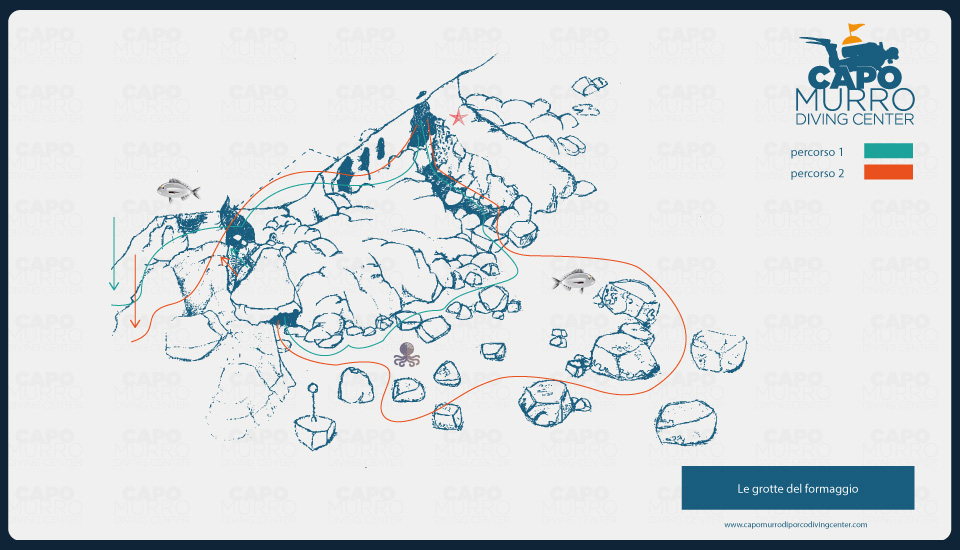 This wall dive is suitable for all levels of divers and does not present any particular difficulties. The shape of the large underwater caverns which characterise this site, free of any forks or turns and with solid rock floors allow divers to explore in complete safety. What is more, our air bubbles cause no damage as the vaults of the cave are outscropping and exposed to wave motion thus unhabitable for encrusting organisms. However, it is advised to pay attention to the presence of an eventual current which could slightly increase the difficulty of the dive.
From the mooring bouy, we head towards the north on the surface for a few metres until we reach the proximity of the cliff. From here we dive down a large rock which rises from a depth of 3metres to the surface. On the eastern side, the closest to the cliff, a tunnel opens out which starts at a depth of 9-10m and leads down to about 18-19m.
The walls of this passage are a veritable tapestry of colours, thanks to the presence of Sponge, Bryozoa and Yellow Cluster Anemone. It is also common to see crustacions such as Mediteranean Slipper Lobster and Sea Bream.
At the end of the passage we head North, keeping the wall to our left, which from 9-10m falls to 18-20m. Moving away from the wall, we find an cutcrop of large rocks spanning out for about ten metres. Rising from a depth of 20 to 35m, it is common to come across shoals of Sea Bream, Brown Meagre and the occasional Grouper.
Returning the walls of the cliff, we can see how in some places it falls almost vertical and in others forms a more gradual slope. After a few metres we find ourselves in a narrow canyon which reaches an approximate depth of about 18-10m and points almost perpendicularly to the coast line. From here we return above the crag and swim back south
In the cliff right above the canyon there is a large opening to a cave, which is about 20m wide. Inside the cave a hole in its face allows rays of sunlight to shine through casting a wonderful spectacle of dancing light
Leaving the cave, on our right we find a small corridor and another large opening which leads us to another absolutely spectacular cave. It is this cave from which the dive gets its name. The shape of the cave is striking. There are infact two entrances at a 90 degree angle from one another forming a hypotectical L shape. The effect on the light in the cave thanks to the presence of these two entrances is a sight not to be missed. Filtering through the cave a blue light illuminates a myriad of white Sponge which stretch out for almost the whole length of the rocky walls and appear to shine. At the end of the corridor at the bottom of the cave, a depth of around 10-12m, a large rock offers refuge to Brown Meagre.
Upon leaving the cave, we find ourselves infront of the large outcrop from where we started the dive. To move back towards the mooring buoy, we swim back keeping the cliff face, which falls to a depth of 9-12m, to our right. Along the way it is often possible to see Salema Porgy, Saddled Sea Bream, Sea Bream, Parrot fish, and with a little luck pelagic fish such as Amberjacks and Leerfish.