The tongue of the giant - East 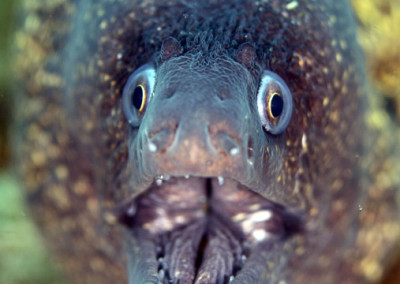 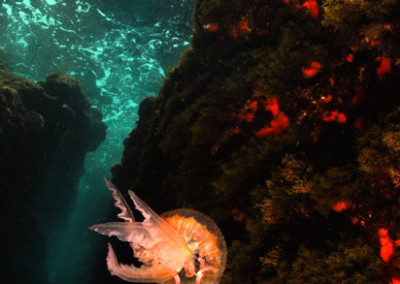 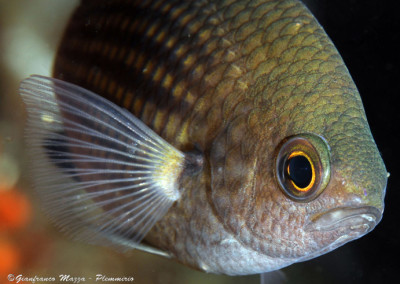 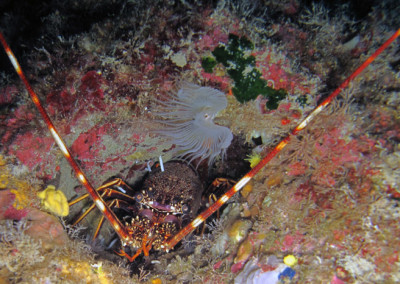 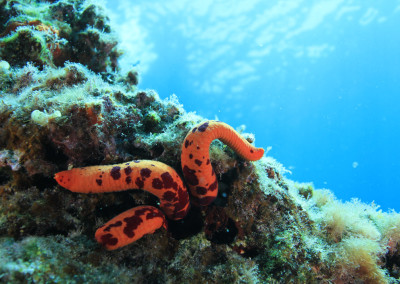 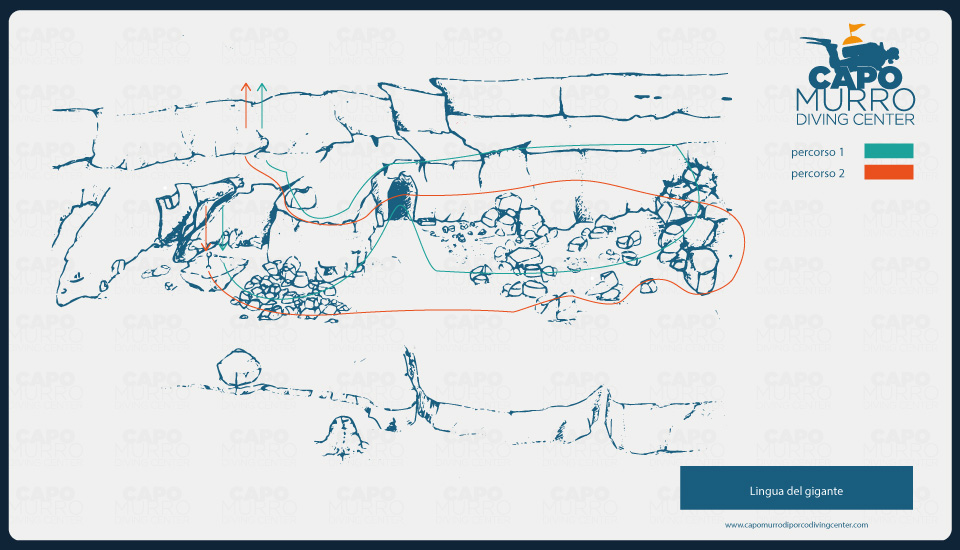 This wall dive is suitable for all scuba divers. It poses no particular difficulty. However, it is always recommended to check for the presence of a current and keep a check on the planned maximum depth whilst on the dive, as moving away from the wall the bottom of the sea lies at a depth of well over 40metres.
Diving down next to the mooring buoy, at a depth of 18m we arrive at the summit of a large round shaped rock which rests on the bed at 25-27m. At its base, we can see numerous richly coloured fissures. A few metres west there is a large tongue of white rock which from 12m drops away to 25m and futher along to 30metres. This is the ‘tongue’ which has given its name to this particular diving spot. Swimming East, with the wall on our left, we come across a large crevice inhabited by large examples of Brown Grouper and arrive on the perifery of a majestic entrance to a cave which is between 18-24m wide. The sheer dimensions of the cave evoke the image of portal which looks out over the blue. Upon entering on the left side, we follow a long vertical fissure which reaches to a depth of 15m where at certain times of the year inhabits thousands of Narvel Prawns. The light of sun pentrates the cave through gaps in its ceiling casting suggestive dancing light. Futhermore, these fissures provide a helpful emission for our bubbles. Returning to the mouth of the cave, keeping to the left we pass through an opening illuminated in an electric blue light.
Just outside to our right is the beginning of an area where at a depth of 22 to 32m we can see the remains of vessels and evidence of an ancient shipwreck.
On the East of the cave, areas of the cliff face alternate from being perfectly vertical to being coverd with large blocks of white stone which reach down to 35m. Along this part of the wall it is almost certain that we will come across large Bream and Grouper who swim within the labyrinth of stone blocks.
Returning towards the buoy, on the edge of a ridge which runs from 10-12m to 20-22, we take in a large rock which rises from a depth of 12 to 7m. Here we can see Banded Bream, Saddled Sea Bream, Salema, Parrot fish, Octopus, and Moray eels. Here it is also common to spot Flabellina and Cratena species of Nudibranchs,
Along the route of the dive, we can also see three ancient lead anchors, resting at depths of 24, 27 and 21metres. 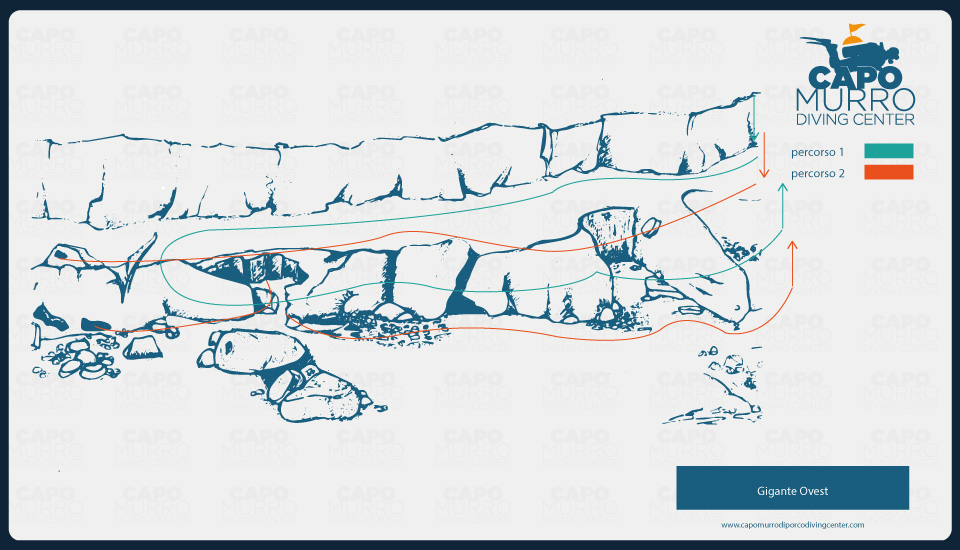 This wall dive is suitable for all scuba divers. It poses no particular difficulty. However, it is always recommended to check for the presence of a current and keep a check on the planned maximum depth whilst on the dive, as moving away from the wall the seafloor is located at a depth over 40metres.
Diving down next to the mooring buoy, we arrive at a large circular shaped rock with numerous fissures and crevices, the base of which lies at a depth of 25-27m. Heading in a westerly direction, we go round a ridge of white rock in the form of a saddleback otherwise known as the “ the giant’s tongue” which drops to 25m and crumbles down to over 30m. Keeping the coast to our right, after ten metres or so, we arrive at area where there are large rocks spread out over the seabed and where we can encounter large Grouper and shoals of Seabream. In the proximity of these rocks, we move closer to the wall where at a depth of 21-22m we find a long hollow. This is an ancient gully, formed over time by the motion of the waves at a period when the sea level was a lot lower than the present day. Here we find a passage which leads us to a rocky basin at a depth of 17m and, in the final stretch, to a small cave.
Having past through this passage, the floor of the coast drops to 20-22m and is covered with small and some larger rocks. Close to two of the larger rocks, there are two corresponding openings through which a large vertical corridor leads to a higher plain of the coast at 12metres. This is where we start our return journey, travelling back East along the higher part of the coast at 10-12m . Enroute we come across shoals of Bream, Saddled Sea Bream, Salema and the curious Parrot fish. If we glance over into the open sea, with a bit of luck we might be able to spot open water fish.
Prior to arriving back at the lingua, we pause for a moment to take in a large indentation in the coast. At a depth between 12-14m there is a large crevice which inhabits Bream and is a hiding place for Grouper. Swimming past the giant’s tongue we head back to the mooring buoy to start our ascent.